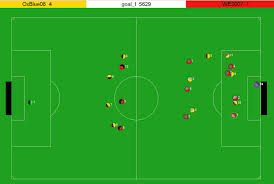 Soccer is not a complicated sport, and therefore the rules are simple to abide by. Consisting of 11 players each, each team has a goalie and 10 field players, each with different positions. The goalkeeper aims to stop balls entering the goals, using and parts of the body necessary, including hands, except for when the ball has been passed back to them by a teammate. If the ball goes out of play behind the goals the goalie must kick the ball off the ground. If they pick up the ball, however, the are allowed to drop punt it. If the ball is kicked out behind the goals by a teammate the opposition receives a corner kick, which is taken from the corner of the field.

In soccer, a team’s main aim is to score as many goals as they can by putting the ball into the goals at their attacking end, and to defend their goals from being scored in. All body parts except for hands can be used in moving the ball down the field and there are no limitations on the length of your run, although a long run will probably result in dispossession.

To dispossess opponents of the ball, tackles may be made. Tackling the opponent / missing the ball or tackling dangerously will result in a free kick to the opposition at the place of the foul. An extremely dangerous tackle will result in a red or yellow card. Fouls will also be awarded to the opposition if you pull on an opposition player’s shirt or face your studs upwards. The worst thing you can do is to tackle the goalie, as you will be red carded.

If a foul occurs in the penalty box a penalty will be awarded. This means that only the goalkeeper can defend a free kick from inside the box. All other players must stand outside the box. Usually, penalties result in goals.

When a player touches the ball before it goes out of the field, a throw in is awarded to the opposite team. The person taking it must throw it over their heads with 2 hands and the rule is that the ball has to be released behind the head. Players playing a defending or midfield role usually take throw ins.

When a man on the attacking team is standing on the goal side of the last defender of the opposite team it is called offside, which results in a free kick to the defending team where the offside occurs. The goalie does not count as a defender.

When you are playing this game you will need to make sure that you don’t take on the goal keeper. He almost is considered to be in sacred ground back there at the goal. Another words, goal keepers are well protected by the rules. Doing a move like this will only gain your team a foul. This is a punishment which will let your opponents have a free turn at trying to score a goal. Of all the basic rules of soccer, that of winning the game by having the most goals scored is the end all be all. You must try to reach this by playing fairly, otherwise your team will suffer useful points.

So, what else can be included in the basic rules of soccer? what can you anticipate? You should try and ward off any dive tackles as this can cause hurt to the person that you are tackling. Now, once you become more experienced there are ways to accomplish the same end result as a diving tackle would. Except without the injuries and penalties. Also, you will want to invest in the right soccer equipment that your soccer team approves of. Now there is only one main rule that you will need to remember. From all of the basic rules of soccer this one counts the most – Have Fun!

Well now that you know a few of the basic rules of soccer you can try this game out for yourself. There are many city and state leagues that one can join to start in there soccer endeavors. There are very few rules for you to truly remember but if you want to know some of the other rules that are around for more of the big boys (big matches) soccer games you can see what the FIFA World Wide Web site has about these soccer rules.

Big thanks to our sponsors at DMT Property Maintenance, and their fantastic landscaping near me,  for their support of our post!